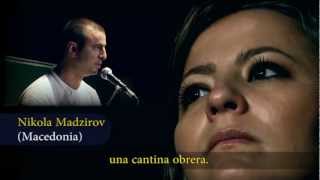 The 21st International Poetry Festival of Medellin was held as a Tribute to the spirit of the origin, expressed in poetry and singings from theAfrican continent, represented by 12 poets and musicians invited to the event. The musical and poetic language of many of the invited poets favored and encouraged that a further communication was established with a wide and fervent public.

In 21 years, Prometeo has generated an extraordinary expectation in Medellín and the world towards poetry and has performed with great aesthetic care and deep human quality.The poets who have visited Colombia have developed processes to communicate with the audience, composed not only by the concepts in poetry, but also withsensitive, emotional and human elements that fostersa communitarian communication, congregant, that transforms the city.It is these aspects that have drawn on multiple planes, the life of our city and its inhabitants.

The public of the 21st Festival showed event after event, his hope and confidence that poetry can change their lives and change, with poetic actions sustained over time and of profound social influence, the life of the city.

The Festival brought together people of all ages and from all social strata, includingpoems readings for the homeless and acts held on displaced people settlements, but also for people with privileged economic conditions such as those residing in El Poblado.

The audience that Medellin has developed for poetry deserves a space for reflection.We found a large group of people who have a shaped and broad notion of contemporary poetry in the world and who are capable of responding in a multiple and harmonic way to different situations, participating in various ways with songs and choruses in the different moments that occurin different events, particularly the opening and the closing events of the Festival.

There is a large audience that has matured with the Festival and can maintain a high degree of concentration in large events such as the closing event, which lasted for seven hours.

In its projection towards the city, the Festival makes a responsible and selective reading of poetry in the world.The response and results of Young Poetry Prize is also an achievement to note, for the excellent quality of work and the maturity of the awarded ones against the poets of the world and public auditoriums.

Among all the activities, we highlight the 25 who formed the 15th School of Poetry that developed, through workshops, courses, conferences and panels, and which benefited about 980 people. Once again, the public showed their cognitive growth, intelligence, lucidity and creative capacity.

There wherecoverage by Basque television, by the Deutsche Welle TV, by Telemedellín, and Teleantioquia and by national news.

The International Poetry Festival of Medellín celebrated its homage to the spirit of Africa, with the participation of poets, musicians andspecialists in the poetry and literature of the original continent, in coordination with Peter Rorvik (Poetry Africa - Centre for Creative Arts, University of KwaZulu-Natal) in Durban, South Africa.

As part of the festival was held the World Meeting of Directors of International Poetry Festivals, which made it possible for directors and representatives of 37 of the largest poetry festivals in the world, to observe the uniqueness in the context of the auditoriums of theworld poetry, that symbolizes our audience.The World Meeting acknowledged that the work done in Medellin with poetry, has created a new spiritual movement, cultural, social crowded and that this phenomenon can be replicated anywhere in the world.

The meeting was successful and constructive to a point in which all processes called converged in the formation of a World Poetry Movement.

This process gives a new projection for the International Poetry Festival of Medellin that was renowned by the directors of the largest poetry festivals in the world, as an example in the organizational field and its calling power and admitted that he is in a developed and mature experiencewhich demonstrates the transformative power of poetry in society.

The International Poetry Festival of Medellín is a scenario in which different geographic foci come to get feed. It’s applied the character of themulticulturalisminits appearance of the collective construction of qualification of consciousness, human ecology and language.It is evident that Poetry Festivals do enable a spiritual cusp that must be amplified for the world.

The World Meeting reflected on the problems besieging humankind in the tragic current crisis, at all levels, and how poetic actions may be organized for the globalization of poetry, based on a coordination or on a Worldwide Network of Festivals, Poets and Poetry Projects.

When the current world model has run its course, generating devastating climate changes and painful and long social conflicts, poetry can and must be proactive and constructive, through its own action upon the world, availing itself of the mass and alternative media as well.

The World Meeting of International Poetry Festival Directors proactively and constructively convened around the world situation, to implement actions, poetry readings and poetic interventions that contribute to modern society in its current plight. Poetry arises from a complementary spiritual reality, necessary for individuals and peoples to better inhabit the Earth. Poetry has always desired and sought man’s profound change. The meeting of organizing and managing poets enables the coordination of world actions, amplified by mass media, in scheduled activities that aim to promote an interlocution with cultural, social, economic and political world forces.

The participants in the World Meeting of International Poetry Festival Directors, representing 36 festivals in four continents, were: