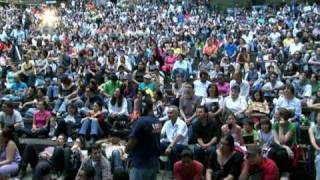 In the evaluation of the XIX International Poetry Festival of Medellin (July 4th to 11th, 2009) done this week by the Organizing Committee, we have thought in the first place about the need to clarify the nature of the Festival through its historic development, which constitutes the strengthening of an aesthetic proposal for our country, with vast connections and correspondences with other important poetic projects of the world, in a time of universal desolation and barbarism.

The evaluation approved the significant extension of the International Poetry Festival of Medellin to 16 towns in Antioquia and ten other Colombian cities, as well as the carrying out of 130 activities: Individual and collective readings of poems, workshops and poetry courses, lectures and conversations between poets and the public.

Facing the extreme duress of the war that has ravaged Colombian society for several decades, before the impotence or indifference of the world, the International Poetry Festival of Medellin shares these words of Saint-John Perse when receiving the Nobel Literature Prize in 1960:

“Do not fear, do not doubt, for doubt is sterile and fear servile… It is not true that life can disown itself. Nothing living proceeds from nothing, nor does it love nothing”.

The peaceful process promoting the Festival symbolizes an instance of experiential collective reflection and construction, affirming the interior strength of Colombians in their search of a high, just and beautiful form of existence, in contrast with the absence of elemental rights such as employment, health, education, housing and peace for millions of citizens.

The Festival is ample and open, and gives rise to a pluralist and constructive dialogue. Its public is formed by persons of all ideological and religious origins, of all social classes, of all economic strata in a city where the Festival has held in its districts nearly 1.300 readings of poems since 1991. Its public has in common its unity with respect to the world poetry heritage.

Preparation for the XIX International
Poetry Festival of Medellín

It is necessary to take into account some views on the time of preparation of this year’s Festival, which was particularly complex, in the first place, because of the deficit and bank debts affecting the Prometeo Corporation at the end of 2008, which we hope to solve by the end of 2009, due to the collecting of our own resources. In the second place, on account of the persistent political harassment and a series of calumnies, provocations and threats against the Festival, by some extreme right Colombian intellectuals.

We ask the National Government if the attacks and intimidations proliferating now against the Festival and some important Colombian poets are not attacks against the freedom of expression and creation.

In such a sense, the Festival remains its attention against the attempt to silence and censure it, and against every blackmail searching in vain to silence it facing the serious crimes and killings affecting Colombians in the midst of a general intolerance.

The Festival received from the Swedish Parliament the Alternative Nobel Prize in 2006, “for affirming and expressing the human values of beauty, creativity, freedom of expression and for its work with the community, in opposition to the fear and violence still prevailing in Colombia and the world.”

In 2009, the Festival had the financial support of the Governments of Germany and Switzerland, the Dutch cooperation agencies Humanist Institute for Development Hivos, Oxfam-Novib, Döen Foundation and Prince Claus Fund; of the German Heinrich Böll Foundation; of the American Caipirinha Foundation, of the French Organisation Internationale de la Francophonie.

As a result of an Agreement of the Council of Medellin from 1993, the Festival has the financial support of the City of Medellin. Because of its national impact it receives by law a contribution of the Ministry of Culture of Colombia, all of this not implying the putting at risk of our ethical and aesthetic tenets.

To all of these institutions, as in previous years, the Festival renders a rigorous annual report that allows it to keep its pacts and agreements.

This year, the Festival made an effort to search and obtain the participation of the Minister of Culture, Paula Marcela Moreno, in the closing of the Festival, with the purpose of exchanging opinions on the fulfillment in 2010 by the National Government of the Law 1291 (of March 6, 2009) declaring Cultural and Artistic Heritage of the Nation the International Poetry Festival of Medellin.

Naturally there is fear among the conservative intellectuals and the more refractory sectors of the National Government about the influence of the International Poetry Festival of Medellin on the young people of the country and on the presumed political use of the event made by its organizers. Poetry as a vigorous manifestation of beauty and action transforming society, is in clear contrast with the monstrous reality of intransigence, promoted by the hatred fruit of war and the antagonist positions arising from it, fed even by some Colombian poets.

The organization of the Festival, in spite of all kinds or pressure, will never write or promote hymns of war or take part in any political organization, nor in any form of war or violence. Its aspiration corresponds to a deep vocation of peace of the Colombian civil society that claims to be excluded from the war, but also to be included in more generous concept of social justice.

We have and shall inform —if it is necessary— the world community of poets and artists, as we have done through the Campaign of Solidarity with the International Poetry Festival of Medellin, backed by more than 970 poets, artists and intellectual of 126 nations of all continents, about the process of unprovoked attacks against one of the most progressive cultural events in Colombia, such as the Festival, and against its organizers, which at all costs must be respected by the forces in the conflict.

On the public of the XIX Festival

“Colombia has in the International Poetry Festival of Medellin the most important poetry festival in the world, because of the massive participation of the public,” wrote the Colombian poet William Ospina in his column of last Sunday, July 19 in the newspaper “El Espectador.”

The Festival is an expression of the poetic art as a collective experience of mutual enrichment of the poets and the public, thus taking part in a shared intellectual and living experience, in which the audience searches in poetry the transformation of their lives. The public of the Festival is an acting public, not a mere spectator.

The public of the Festival grew in quantity and quality in 2009. Surveys showed that it regularly reads books of poems. The social and cultural impact of the event also increased because of the greater access of people to the information about the Festival, now with a greater TV (live and pre-recorded broadcasts), radio, press and Internet coverage. The Web site of the Festival reached more than 40,000 browsers during the last month and it is now read in 135 countries in two languages.

Each celebration of International Poetry Festival of Medellin is a ritual exercise of energy renewal of the city. Though apparently poetry has not changed human history, it has however transformed the human spiritual vision and sensibility of history. Without poetry the world would not exist. Rational and irrational forms of poetic knowledge run through each Festival, and the people know well that terror and death are not the solution for the deep crises of human beings, and they also know that the Festival is a great living energy in strong contrast to death, as the poet Nguyen Quang Thieu expressed it.

The Festival produces an atmosphere and a movement of the collective conscience of the public who perceive that reality can be modified from the interior of persons, who express themselves as the manifestation and action of a personal and collective intimacy. A reality is produced diverse from the painful history of Colombia.

A young woman who attended the School of Poetry spoke about the repeated fault-finding of people complaining they do not understand poems in other languages (as if the translations into Spanish of all the poems were not read after the original versions read by the poets). She expressed that this circumstance was for her the most beautiful and the one she most enjoyed, as she listened to the diverse voices of the world, the otherness of the music and the poetic traditions and legends of the Earth in the writing and the own voice of the authors.

The evaluation also took note of the constant and deep solidarity of the world community of poets with the International Poetry Festival of Medellin, its strong relation with the organization of the event and the high participation in its history, that this year reached the number of 915 poets from 144 nations of all continents, which certainly places it as the poetry festival with the widest geographical coverage in the world.

With roots of love for the future:
People speaks of the Festival

Received messages from invited
poets returning to their countries